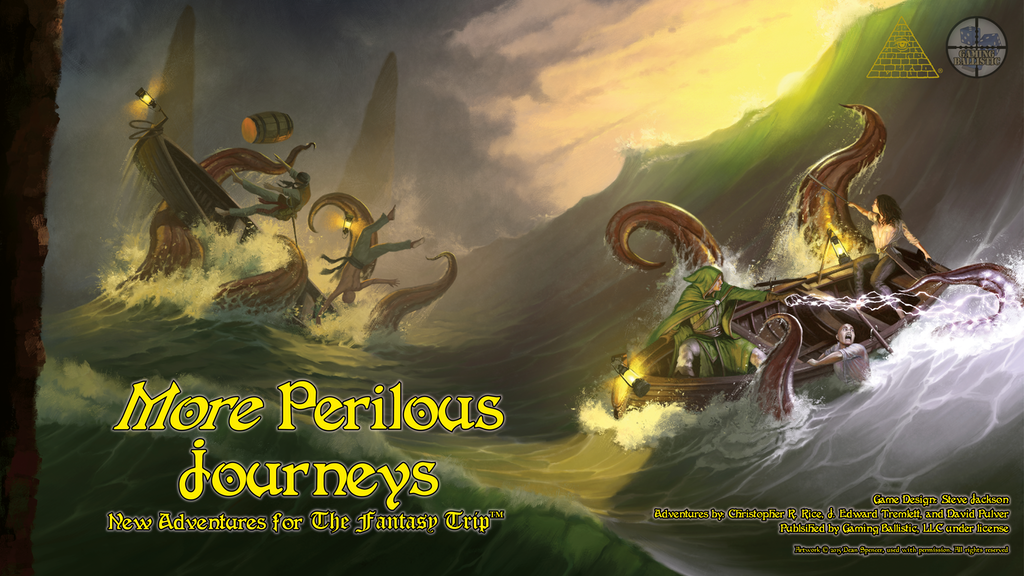 Latest Updates from Our Project:

Last night was a late one...but four books got ordered from Mixam on schedule. Should have them at my house in the next two weeks or so. I also ordered 350 book mailers, to cover the physical stuff from the USA (and leave me some spares).

Eight of the 11 pieces of interior art for Sunken Library are in hand and inserted into the document. I expect to get the final three before the middle of next week.

We're down to small tweaks and "you forgot this" errata corrections in the text.

I have 56 of 62 pieces of counter art under commission, and the remaining six are more or less going to whomever finishes their set(s) first.

If there are no hiccups, I'll place the final print order for The Sunken Library next Friday, as well as pushing the final PDF updates intended for the Kickstarter. I shall also order 55 copies of each of the five books from Mixam UK to support rest-of-world distribution.

And once I get the books at my home, we have a pack-and-ship party...and then we're DONE.


(Today I also issued the final three refunds to three backers with orders for physical products who did not fill out their surveys. This practice, which I stole from SJGames, means for the first time, I have a totally clean slate in Backerkit. When I have sent out all the physical copies, the project is truly closed out.)

Just another warning. Tonight I close the pre-order store and lock addresses on Backerkit. I shall also process refunds for the four people who have ordered physical product but not done their survey.

Tomorrow I will review my existing errors and fixes for the four PDFs you have already received (everything but Sunken Library), and spool out final PDF files for printing for those books. By day's end I'll have placed the orders for those books.

I have orders for 295 copies of the Sevantes series, and 302 copies of the solos in the USA, and about 50 more internationally. So my US order is probably going to be about 400 books each; I'll cut the UK order a lot closer, maybe 55-60.

I'm expecting art from my team at the end of this week for The Sunken Library. I'm down to a few quibbles and bits for errata from a preview team, so as I get the art in, I'll get the team moving on the counters. There are 62 of them, each unique. This will be the largest number of counters to appear in any of my products to date

Since the end is in sight, I wanted to talk a bit about what's coming next for Gaming Ballistic, and TFT.

Firstly, in the next week - maybe the next few days - I'll be standing up a Patreon. Those who wish to support my efforts through that vector, in return for some delivered content and sneak peeks behind the curtain as various products (TFT, Dungeon Fantasy RPG, Dragon Heresy, Mission X, more?) are developed, will be able to do so with my gratitude.

That's great and all, but in terms of concrete things for TFT players, the next project is shaping up in my mind.

The first Character Collections volume - which most of you got as a free PDF - inspired me to do more.

I shall be writing five more volumes, ranging from 12 to 24 pages, each themed. I'm going to try an experiment, inspired by some of Phil Reed's projects as well as the GURPS 2020 PDF Challenge.

We will start with three volumes - Character Collections 1 (in PDF), plus two more. CC2: Rookies, and CC3: Bandits and Outlaws. CC2 is targeting 12 pages, and CC3 is already laid out at 20.

These products are going to include counters as part of the layout:

This is a pure layout example, with randomly generated idea seeds that are present to test some methods to help streamline the production process and ensure that information is consistent across form factors. Form factors? Yes. Cards and counters.

I'm working the sourcing, and international shipping of "stuff" is going to be hard, as always. But I'll do what I can.

There will be three more volumes available as stretch goals are met. They will simply be added to the PDF rewards at the end of the campaign. The more backers join, the more volumes are included for the base pledge level.

Hardcopy will also be available for all volumes, as add-ons. So will cards. And counter sets. Basically the pledge covers the PDFs; the add-ons cover the physical goods. More details later. I'd expect to see this kicking off in mid-February.

And with that...back to work for me!

I have sent out, through Backerkit, final warnings to update addresses. I will lock them on Thursday.

I'd expect delivery to my home between 1-2 weeks, but one can never tell these days.

Rapidly closing in on the end.

Once the entirety of the art is finished (1-2 weeks I hope), I'll pop it in and then immediately place the print order. As soon as those arrive, my family will start the process of packing up all the orders.

For international orders, it's basically the same thing. I'll place the order to Mixam UK, and it's about 50 books. When they're all there, Kixto will start fulfillment.

So as they say: the end is in sight. Once my part of the creative process is done, I'm going to get work immediately on new projects for 2021...including several more volumes of the Character Collection series. Plus of course it's time to get to work on some Powered by GURPS stuff...

Available in your email box and download file now is

Sorry these took so long.

There are errata fixes and some other tweaks to

I did make progress on The Sunken Library as well. I chatted with SJ about a few magic items, and revised some things based on feedback from playtesters.

Right now, 80% of the art is commissioned, and I expect to see the last two pieces enter the sketch phase tomorrow, having secured preliminary agreement from the last artist via FB Messenger tonight. Gotta work out pricing and then it's on. With only 1-2 pieces for each artist, I've asked for a "sooner than 10 days" delivery.

That leaves a whole lot of NPCs to minimize the load on the GM, but these are just in "quick-stat" format, so this should take hardly any time.

So we're doing rather a lot better than we were shortly ago...and I have every expectation of excellent progress over the next few days on finishing up the wordsy bits, but it's going to be a week or two before all the interior and counter art is done.

There always seems to be something. The usual rules for errata apply: rules errors, typos, formatting goofs, and other flat-out errors are obviously "please tell me." Style and clarity suggestions need to leave the layout intact, so be judicious.

Submit errata here. (I mean, I hope we stomped all the bugs, but come on...bugs are persistent. Goofs find a way, as Ian Malcolm would say)

Today I went back and tweaked, did art, formatting, hyperlinks, and credits for Roc of Sages. I've got just a few more counter art pieces to receive from Juan, which I expect Real Soon Now.

I have semi-randomly selected about 35 people who have received the file via email, plus a few more stalwart playtesters who have given me outstanding help thus far. As fresh eyes look over the thing to eliminate obvious errors, I'll also be submitting the manuscript as it stands to SJGames for ship approval.

When I get it, I'll distribute this PDF as soon as the remaining art comes in. I'll take errata via the usual method right up until I send it to print, which is probably a month or so...though I'll do less if I can.

Catcombs is right on Roc's heels. I think I only need one piece of art - a single counter - and this one is ready for proofing as well. I have to go through and ensure Talents and Spells are bold where they need to be, "right now" die rolls are highlighted, and of course the always-fun entering of the hyperlinks. But again, this one has gotten a lot of feedback from playtest, with useful tweaks, and will be ready to give to SJGames for ship approval as soon as Roc gets the thumb's up. Sooner won't help: Alain can only read one book at a time.

The least far along...is still pretty far along. A lot of the counters here are repeats of Library, and some of those counters may see re-use from Catacombs, but giving me plenty of room to concentrate on the new and unique. There are twelve interior art pieces that need doing, and my team is big enough that I could legit give "only" 2-3 pieces to each of 4-6 artists and get them done right quick. We'll see, though: 2020 may be over, but we're not out of the woods.

I still need to work in stats for a lot of fodder opposition. The process of creating the Character Collections (both the one you've seen, and a few you haven't) has given me a lot of ideas for unique but quickly described NPCs, and I'm going to insert as many as I can into the book, something I call "not giving the GM homework" when it comes to fights.

But other than the art, what I'm describing above is not weeks of work. It's days of work. So with luck and appropriate effort, the art will happen soon, the NPCs get written, and then we're looking at final proofing and submission.

And then I'll give it a short pause - maybe as little as a week after Sunken Library gets ship approval - and then place the print order. Mixam is running pretty fast, so the books should show up on my doorstep right quick for the USA orders. The Rest-of-World stuff happens via Mixam/UK...so those orders will be on more or less the same schedule. There are only 8-10 folks who have ordered from Four Perilous Journeys, and maybe 50 international backers with physical orders from the new books. So pretty much easy-peasy.

Looking forward to finishing this for you guys...and then getting right into the next steps for new work.